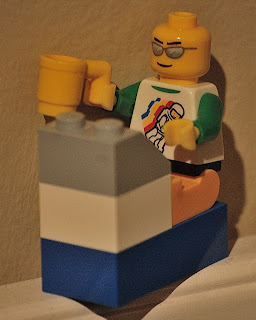 A traditional "first program" that people write when learning a new programming language is a simple task of displaying "hello, world" as output. It isn't a great first program - it rarely illustrates much of anything about the language. But it is tradition.

So, in keeping with tradition when starting this blog about writing programs - "hello, world".

What is this, anyway?

More importantly - I want to talk about why coding excites me. What it is about this... thing... that I've been doing for over 2/3rds of my life that is so enjoyable?

I will be sharing a fairly wide variety of kinds of posts. Many of my posts will be technical, but will focus on a programming concept rather than the syntax. I'm a strong believer that the "slinging code" part of coding is easy - the rest is the more difficult, and important, part. Other parts will be less technical. There will be some code examples given, particularly when I'm talking about a particular language or toolkit, but other times I may use "pseudocode" to illustrate an idea rather. Some posts will be for skilled programmers, while others will be for people who are just beginning to code or may not even code at all.

Most of what I say will focus around five things that I think are most important when it comes to coding:
Let me talk about each briefly now, but you can expect that we'll be talking about all these aspects in the future.

Typically, when we talk about "science", we talk about discovering fundamental laws of nature or the universe. We seek universal truths. How can we have a "science" about something that is completely artificial and created by humans?

It turns out that there are fundamental laws that underlay the code that we write. Computer Scientists will talk about algorithms and how efficient these algorithms are. At a time when computer hardware gets faster and faster, it is tempting to use inefficient algorithms - but some are so inefficient that no matter how fast our hardware is, they may never solve the problem. Others may take more memory to process than even the most powerful systems today have. Understanding these pitfalls, and how to avoid them, are hallmarks of good coders.

Again, historically the field of engineering sought to take the fundamental laws discovered by science and apply them to building things of practical use. Civil engineers, for example, take the science of physics and applies it to creating things like buildings and bridges.

As I hope this blog will show, software engineering is really just a small part of the bigger picture.

The Noble Art of Writing Code

Most good coders will talk about the aesthetics of some chunk of code. We may praise our work by saying it is an "elegant hack" or criticize some code we are reviewing by condemning it as a "horrible kludge". We may even say that some code we're reviewing (never that we wrote, however) is "spaghetti code".

These are not precise terms, and good coders may disagree about the particular aesthetics of some code or a programming language, but the best coders do have a feel for how elegant code can be. It goes beyond the strict science and engineering that the code may reflect and has an inherent beauty.

Coding Philosophy - How we Think About Code

Related to the art and beauty of the code is an underlying philosophy about coding in general. In some ways, this is almost a "culture", a way of life, rather than a way of thinking. It almost becomes a cliche or a stereotype for many things, but there are some serious aspects of a coding philosophy that help us become better coders. These are principles that help us explain why some code might be more aesthetically pleasing than others.

Like many philosophies, however, sometimes these take on "religious wars" - battles for mindshare for a belief system that, fundamentally, don't really make a difference. The Windows vs UNIX battles were (and still are) along these lines, but if you want to see a real war, ask a coder if they prefer vi or emacs and beware of the answer.

The History of Computers and Coding

Some of you might be asking "what is vi or emacs and why do they have silly names?" And that is best answered by looking at the history of this field. In an industry where things are constantly changing, is it really worth looking at how we got here? I think so. And while some historical figures and actions in computing are well known and understood, others are less so, but still crucially important.

Not all of computing history is relevant to coding, but much of it has shaped the coding philosophy. I'll try to highlight some events that help explain how and why our code works and behaves the way it does today.

Hopefully that lays the groundwork for what we'll be exploring. I hope you'll join me on this journey through your comments here or via the various links I've provided about how to get a hold of me.

And most of all - get coding!